At Clique, we believe web accessibility is important. With two of our developers Fen and Shara leading the way, we’ve done a lot to fight for its place in the work that we do.

They were our two “go-to” resources for all things accessibility—running an accessibility slack channel, speaking at conferences, and teaching Clique U sessions.

For a while, this worked. But then, we doubled in size and it wasn’t sustainable. It created a silo in our processes, stealing time away from Fen & Shara building their own things.

“A lot of people were scared of accessibility. They weren’t comfortable doing it themselves. They felt the need to ask ‘an expert,’ which was either me or Shara,” Fen said.

So, working together, Shara and Fen asked:

How can we make sure that every team feels empowered to make choices about web accessibility?

The answer? Teaming up to build accessibility workshops.

Here’s how Fen & Shara built their own, team-specific accessibility workshops.

Before Anything, They Sent Out A Survey

The first step to any journey is first figuring out where you are. And, rather than making assumptions about what people on the team knew and didn’t know about web accessibility, Fen and Shara sent out a survey. The goal was to get an idea of Clique’s general knowledge about accessibility.

The results were in. There were a lot of people who had accessibility questions. Some responses were vague (ex. “All the topics”) and some more specific (ex. “What is the best practice around alt text?” or “Common HTML hierarchy nightmares?”). There was a lot of learning and teaching to be done.

Then, They Chose Where to Start: The Development Team

Fen and Shara had three reasons:

“We’re the last line of defense. We actually build the thing. We have power to make sure everyone falls in line,” Fen said.

Finally, It Was Time to Workshop

“Our philosophy was to make it a conversation rather than a presentation,” Shara said. “We told people to interrupt, to ask questions.”

With this collaborative base, they drafted an agenda and kicked off the workshop.

But during Part One, things didn’t go as planned. No one asked questions and no one interrupted. It was essentially a lecture: Fen and Shara talked, and the team listened.

So Fen and Shara took a break, and brainstormed. How could they make people participate? And in the 5 minute window, they came up with an idea.

They asked the team to write down topics they were curious about (work issues, questions, topics, etc.), and stick them to the wall. It introduced anonymity and dissolved the awkward teacher-student barrier. No one was on the spot or trapped under the fear of “looking stupid.” 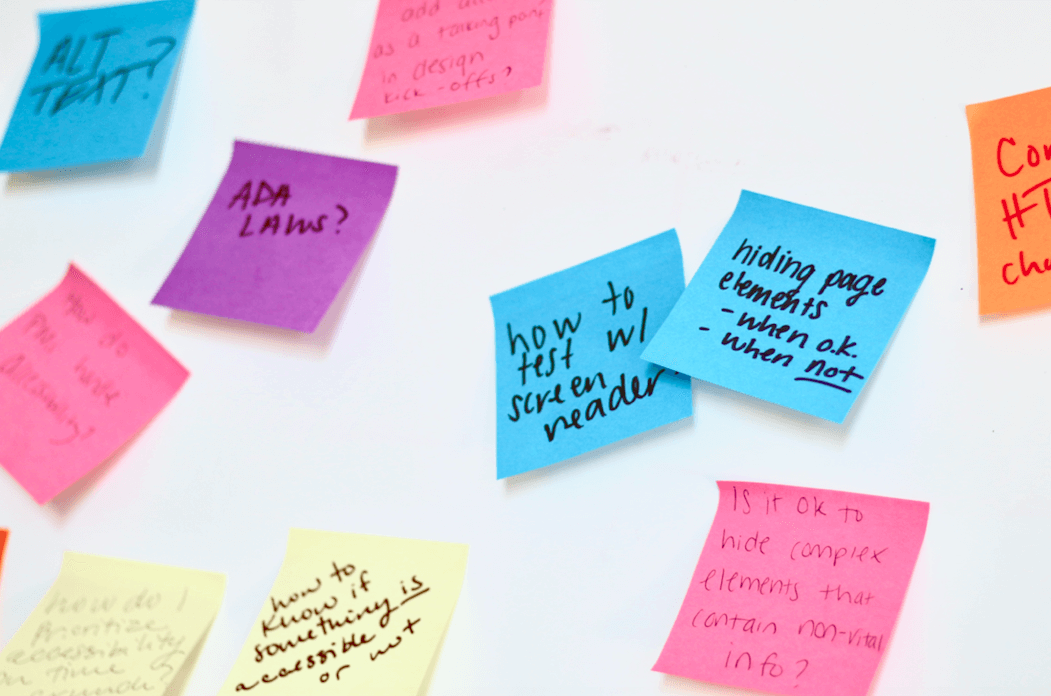 “It wasn’t rigid, and I think that’s why it worked,” Shara said.

For the rest of the workshop, they answered questions and brainstormed solutions. Everyone contributed. There were a lot of “same!” and “that happened to me, here’s how I fixed it.”

At the end of the workshop, the wall was still speckled with unanswered post-its, but Fen and Shara are happy about it…

“Now, it’s easy to prove that we need to keep hosting these meetings, beyond just the intro workshop. It was a really easy visual way to show people on the team that there was more work to be done,” said Fen.

…and the dev team was grateful for the discussion.

“Shara and Fen put a magnifying gla- no, a telescope on the issue of web accessibility. [Accessibility is] never taught in web development courses. It’s shocking how much this subject is unknown to aspiring devs and how many websites are being made without accessibility in mind,” said Tyler, Engineering Intern.

The workshop was a success.

In the following weeks, Fen and Shara ran a workshop with the project management, content, marketing, and design teams. The workshop was adjusted to fit their roles, and molded to fit the needs of the team.

“After everyone is at the same starting line, we can start the conversation around introducing accessibility into the workflow,” Shara said. “This is just a start.”

At Clique, we’re grateful to have team members who are dedicated to taking web accessibility to the next level. Change starts with the people, not the processes.

“We want people to not only be informed, but to be empowered,” Fen said.

SEO and You: How All Teams Can Contribute to Search Engine Optimization Success

How to SEO: A Beginner’s Guide to Search Engine Optimization