We’re excited to re-introduce our Design Lead, Austin Golownia (he/him). Hailing from the Badger State, he attended the University of Minnesota where he majored in graphic design. His original stint at Clique totaled 7 years where he rose from intern to Senior Designer. After a year as a Senior Product Designer at a digital product studio, he returned to Clique to help lead our design team. 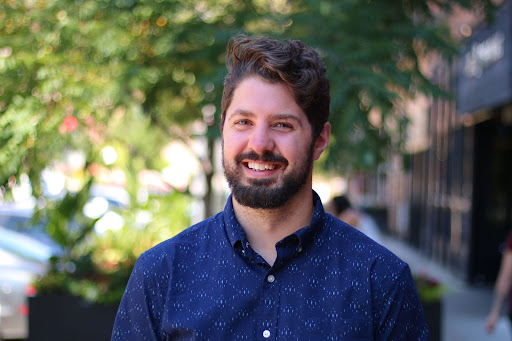 He’s worked on a wide range of projects over the years ranging from the Ventra App to digital products for Second City, Michael Jordan’s Steakhouse, and even McDonald’s.

Here’s a bit more from our conversation.

How does it feel to be back so far?

“It feels great! The people are so good and they care so much about what we do, the work, and each other. Having that care and camaraderie about one another is second to none, honestly. It’s been good reconnecting with old friends and new faces.”

What brought you back to Clique?

“The people, honestly. Just the level of care that goes into everything. And the work-life balance, which as a new dad makes a big difference. I like having a more structured nine to five, dedicated work time, and being able to shut the laptop and go and play with my kid. That alone is worth the price of admission.

And then, obviously, the work we’re doing is really cool stuff.”

What’s something that’s surprised you about being a new dad?

“Honestly? How hard it would be. It took a long time to have those experiences of, ‘this is my kid.’ It definitely took a little bit for bonding. I would hold this little guy and it was an abstract thing where it was all take take take and then once he smiled it was just like, everything changed and it sunk in that this little being loves you and relies on you. So that’s the thing that surprised me the most, how long it took to bond and that’s not a normal thing that people talk about. I expected to have this immediate connection and that wasn’t the case. And that’s okay. And then the other thing too is when that happens there’s so much joy, especially just seeing him grow so fast.”

“We go to our cabin in Lakewood, Wisconsin at least a couple of times in the summer. That’s probably my favorite. My wife and I like to get away from the city and go boating or hiking. We’re nature people. So really just getting out into nature and getting away from screens and all that, you know?

We stare at screens for so many hours of the day. It’s just nice to get away from all that and completely unplug. And it’s great getting to see the world through my son’s eyes as well. We were up there for the foliage last autumn and he was just in amazement.”

“It’s about three and a half hours north of us. So it’s not too far of a drive. We pass Lambeau Field, which is our favorite place to be. Second, Wrigley Field. Those are our two favorite sporting venues. We lived within walking distance from there so that holds a special place in our hearts and we’re both big Cubs fans. We were there when they won the World Series and all that. But there’s something about the experience of Lambeau that you can’t get in most stadiums.”

Wait, how are you a Cubs fan and a Packer fan?

“My mom’s family’s from Illinois, so they’re all Cubs fans. My dad is from the Milwaukee area. They moved up to Kenosha, which is just right over the border. And he didn’t have big baseball ties so we just adopted being Cubs fans. But for football, my sister’s a Bears fan, my brother’s a Packer fan, and our family is all over. There are a lot of inner rivalries.”

All right, let’s say you can visit ANY fictional time and place. What would you pick?

“I’d say Hogwarts in the early ’90s. I’d love to be a student but more of a secondary character just being like, ‘Wow, what the hell has been going on these seven years?’ It would be an interesting experience. We already know Harry Potter’s backstory, but what about those other characters in the background? They’re just there for their education, man.”

No drama. Just doing magic and sh*t, no big deal.

Speaking of cinematic excellence, what’s a show or a book you recommend that you’ve gotten into lately?

“I’m reading a two-part book. Vicious is the first book and Vengeance is the second one, by VE Schwab. It’s about superheroes but the timeline jumps all over the place and I thought it was well written and a good read. You don’t know whether you’re following the good guy or the bad guy.

I always thought that would be a cool concept of like, ‘What if we follow the storyline and all along it was building but in a way where you’re rooting for the villain?’ It’s always the hero who comes in and saves the day. And obviously, he’s the hero but I think you start to see that other concept with The Joker. You can kind of see where he’s coming from. I don’t know that anybody would ever truly root for the Joker, but you feel for him.”

“I’d say be a good dad. I think that’s more than enough. I’m a simple guy. I believe in direction more than goals, so I’d want to just be a good dad and do the right thing. Like teaching a kid what’s right and wrong, you know? All of that is important to me more so than saving or making X amount of money.

Goals are good but they’re more like checkpoints to me, because what happens when you spend your entire life working toward a goal and finally get there? I think it’s more important to fall in love with the process than the end product.

And that’s one of the things that I’ve learned just through painting for a couple of years now. Ultimately, it’s not about the end product. It’s about falling in love with the painting and every brushstroke as opposed to a finished product.”

We love having Austin back as our Design Lead, sharpening our process and shepherding our designers. He’s picked up where he’s left off and we’re looking forward to our new journey together.